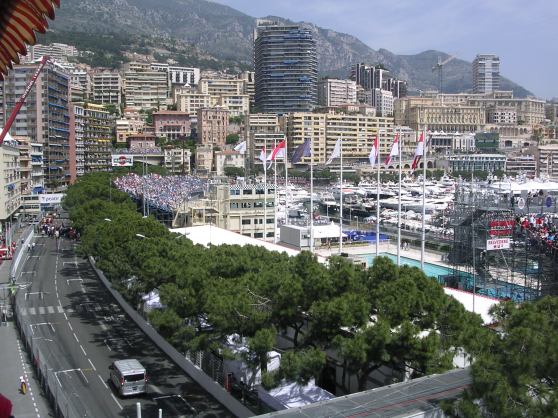 The Monaco Grand Prix is probably the biggest and most prestigious regular event on the French Riviera calendar, ahead of the Cannes Film Festival and the Carnival of Nice. Each year, it brings a magical atmosphere to the Principality, really kick-starting the summer season with plenty of private parties on the yachts in the harbour, a very cosmopolitan atmosphere and huge amounts of visitors (and therefore VAT income for the Monegasque government!). Of course, the Grand Prix completely changes the face of the Principality for 3 months, as the roads are full of temporary grandstands, crash barriers, tyres and blockades which are prepared two months in advance and take a month to dismantle afterwards, so there are huge logistics behind the event, the statistics provided by the Automobile Club of Monaco are impressive (see the “presentation” tab). Since the turn of the millennium, there has also been a Historic Grand Prix, which runs every even-numbered year two weeks before the main race, rather interesting to remind spectators of the race’s heritage as the first Monaco Grand Prix was run in 1929, though the first official race in the Formula 1 calendar was in 1950. And in 2015, the first electric Grand Prix, run by FIA under the name “EPrix” took place took two weeks before the F1 event and now also runs every two years.

END_OF_DOCUMENT_TOKEN_TO_BE_REPLACED

The Old Town of Monaco isn’t really renowned for the quality of its restaurants: between the souvenir shops, you can find snack bars and different restaurants which, without being bad, aren’t particularly memorable, with a few exceptions – until the summer of 2011, when a very notable “exception” opened up.

La Montgolfière isn’t your run of the mill tourist restaurant – if you are looking for very well-executed traditional Mediterranean fare but with a slightly exotic twist and a charming location, this is the place to go. This tiny and very quaint establishment, located on a small pedestrian street in the very heart of the old town of Monaco, a few steps away from the Prince’s Palace and the town hall square, only seats about 20 people and it is staffed exclusively by the Monaco-born chef, Henri Geraci and his wife Fabienne.

END_OF_DOCUMENT_TOKEN_TO_BE_REPLACED

Morning view of the Old Port of Saint Tropez

Whilst I ran Hotel Notre Dame in Nice, I often got questions from guests asking whether it was worth travelling over to Saint-Tropez and I basically told them no – given the hassle getting there from Nice (either a two hour minimum bus ride in summer traffic or an extortionate boat trip), people wishing to experience a snazzy and sophisticated French Riviera atmosphere could head off to Cannes or Monaco instead in under 30 minutes on the train.

But whilst writing this blog, I recently became curious about the near-mystical attraction that Saint-Tropez has over visitors and that’s why a couple of weeks ago on a bright Sunday morning I decided to get up early, see what all the fuss was about by visiting it from a tourist’s perspective and definitely figure out whether 8 years later, I would have replied the same thing to my guests. So here’s the lowdown on what Saint-Tropez is all about and what to see and do there.

END_OF_DOCUMENT_TOKEN_TO_BE_REPLACED 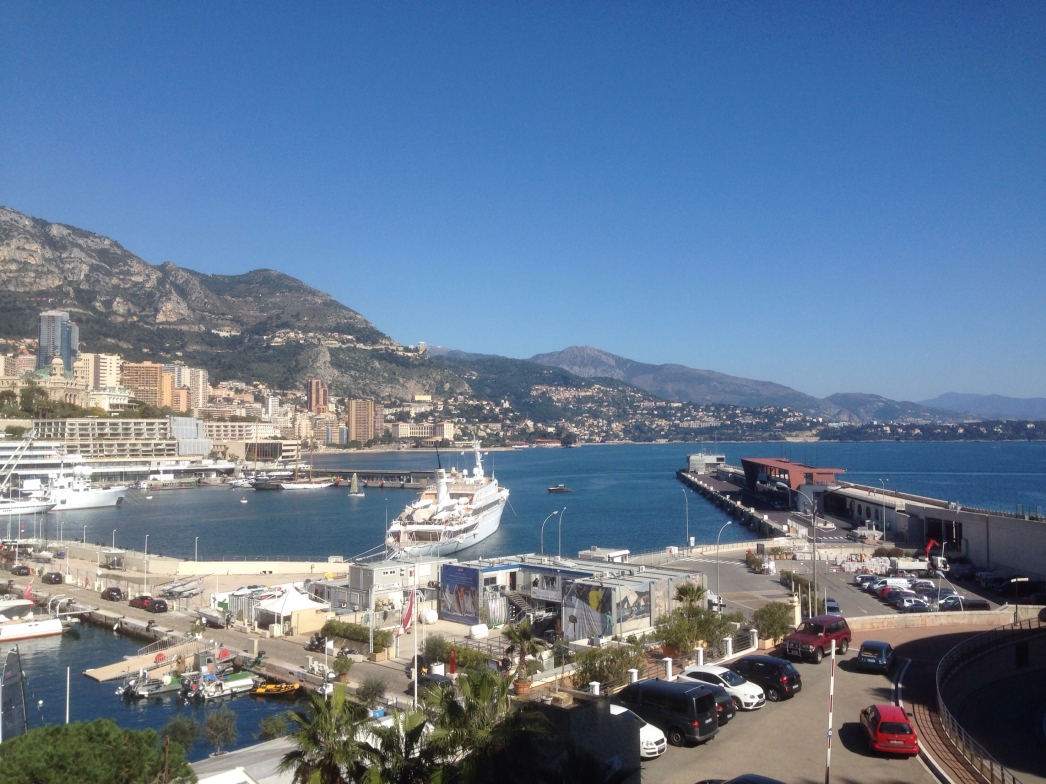 We’re currently enjoying a great spell of beautiful weather after a rather mild winter, which bodes well for a fabulous summer. Here’s a view taken from the port of Monaco this morning over Cap Martin and the Italian Riviera, with the crystal clear blue skies that you can only see at this time of the year.

In the meantime, I’d like to thank all the readers who have enjoyed my advice for their positive comments, we will probably hit the 200.000 visitor mark on the blog in the coming months and this gives me the energy to keep going on, despite the work it all entails! Plenty of new articles are in the pipeline ahead of the summer, I just need to find the time to write them up, so keep yourselves posted and like the French Riviera Blog Facebook page for the latest updates.

Have a fabulous weekend,

Discover the unique charm of the Cinqueterre villages in Italy, with their multicoloured houses, unspoilt nature and amazing food, that can be visited on a weekend excursion from the Riviera.

As I mentioned when I launched the blog, I am not just covering the French Riviera but also some places that are a bit further afield which I have had the opportunity to visit in order to share my experiences. This Easter, I had the opportunity to discover in some depth the beautiful villages of the Cinqueterre in Italy and I am going to relate my experiences in this article…

From my experience in the hotel business, plenty of visitors who visit the French Riviera, especially those from other continents, tend to use the Cinqueterre as a stepping stone before heading to Florence or Rome, and these five little gems are well worth the visit. Naturally, given that I have very little local expertise of the area, this article is no substitute to a real guide book: my sources are just the French Guide du Routard Northern Italy book as well as local knowledge I gleaned whilst speaking to the very friendly inhabitants of the villages. But I hope this article and the practical tips I will provide, written from a “French Riviera” tourist’s perspective, will help you enjoy your stay in the Cinqueterre and enable some of the inhabitants of the French Riviera to discover a beautiful and very accessible part of Italy, just a  few hours down the coast!

END_OF_DOCUMENT_TOKEN_TO_BE_REPLACED

When I moved back permanently to Monaco in 2002, one of the first things I did was to take advantage of the fabulous weather all-year round (which, as a Londoner, I’ll never take for granted!) and start exploring the beautiful mountains and villages located behind the coastal strip of the Riviera that had always fascinated me as a child but had never had the opportunity to visit.

The wonderful Mediterranean climate of the Côte d’Azur provides plenty of opportunities to take advantage of the great outdoors and to partake in activities such as canoeing, canyoning, rock climbing, rafting, mountain biking, skiing and hiking – since I love the great outdoors but hate sports that require equipment and effort, I’ll concentrate on the latter in this article! Over a decade after I started hiking, there are still hundreds of trails that still remain for me to discover, so you will never get bored or run out of things to do.

END_OF_DOCUMENT_TOKEN_TO_BE_REPLACED

When heading down the coast from Nice towards Italy, the last town you will encounter before crossing the border is beautiful Menton. Located in a stunning setting between the Mediterranean and the Southern Alps, the town has a distinct subtropical microclimate that keeps it warm and sunny most of the year and the wonderful old world atmosphere that still pervades the place makes it well worth a stopover if you are heading to Italy or wish to combine it with a trip to the hilltop villages of Gorbio, Sainte Agnes or Roquebrune Village.

Like in most towns of the French Riviera, there honestly isn’t that much to do in terms of pure sightseeing in Menton, but I’d advise you to take a couple of hours to wander around the old town, enjoy the delights of the waterfront, have a melancholy trip around the Old Castle cemetery and discover the Cocteau museum celebrating this multi-talented artist, all in a setting that already provides a taste of Italy with its warm colours, fresh air and greenery.

END_OF_DOCUMENT_TOKEN_TO_BE_REPLACED

I’ll be brutally honest… Ever since my first Xmas here in 1985, I’ve always found that the festive end of the year season was best spent away from the glitz and glamour of the Riviera: having grown up in Britain, the blue skies, mild temperatures and ersatz festive atmosphere don’t really work for me. At this time of the year, I much prefer bitingly cold weather, grey skies, mince pies, proper decorations on Oxford Street, Christmas pudding with brandy sauce, Christmas crackers and the Queen’s Speech on TV – it’s lucky I don’t live in Australia!

However, the Riviera does at least make an effort to get into the atmosphere and this year was no exception, despite some particularly mild weather, with an average of 15°C on the coastline this week. Place Massena in Nice hosts a large Christmas market with the now ubiquitous giant ferris wheel as does the harbour of Monaco, and the Casino Square in Monte-Carlo is always decorated in a grandiose fashion.

But if you happen to be in the area over Christmas and to really experience some true atmosphere, I would advise to go slightly off the beaten track and to pay a visit the small village of Lucéram, only 30 minutes drive north of Nice in the Paillon valley. I’d heard about this village since my hotel days but had never had the opportunity to go, which is why I decided to sacrifice the traditional Christmas morning lie-in and to head up there pretty early whilst the streets in Monaco were still deserted.

END_OF_DOCUMENT_TOKEN_TO_BE_REPLACED

© Kevin Hin, French Riviera Blog, 2005-2014. Unauthorized use and/or duplication of this material without express and written permission from this blog’s author and/or owner is strictly prohibited. Excerpts and links may be used, provided that full and clear credit is given to Kevin Hin and The French Riviera Blog with appropriate and specific direction to the original content.