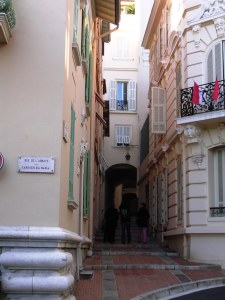 Typical medieval alleyway in the Old Town of Monaco

This is basically part of the walking tour I recommended to guests staying at my hotel a few years ago.  Allow about 90 minutes at a leisurely pace, excluding food pitstops or visits of monuments.

The tour starts at the Place d’Armes: the central market square within easy downhill access from the train station (turn right when exiting the train from Nice towards the “Fontvieille” exit” and go through the tunnel with travellators then follow the signposts and the crowds of people). The typically “Provençal” (ie. slightly overpriced but with lots of good quality “Mediterranean” produce) market is open every morning until around 12pm, so could be worth a quick stopover to have a nice coffee or to grab a snack – there are several reasonable places inside, including one selling “socca”, a typical regional pancake made of chick pea flower. The Place d’Armes is also a great place for people-watching and to see real Monegasque locals going about their daily business (quite a feat especially in the summer), and where most gossip is exchanged about what is going on in town. 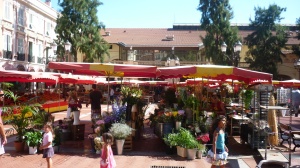 – Looking up from the Place d’Armes, you can already notice the fortifications protecting the Prince’s Palace on the side of the Rocher, notably the Bastion de Serravalle, which dominates the street, as well as the elegant Italianate porticoes of the Palace itself and the fake-medieval clock tower, which was in fact built in the 19th century to look old.

– The quickest way up the hill is to climb the steps of the Rampe Majeure, a 16th century staircase affording great views of the harbour as you climb up. It’s a bit steep but not a very long climb worth it once you get up and see the view. 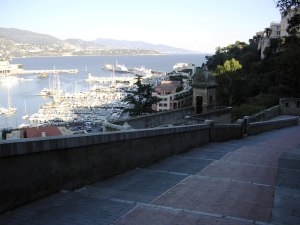 The Rampe Majeur, climbing towards the Palace Square

The ramp culminates on Palace Square, where you’ll be greeted by the bronze statue of a monk concealing a sword, representing François Grimaldi, also known as “Malizia”, who stormed the Palace in 1297 and founded the ruling dynasty. The Palace Square accommodates the infamous Changing of the Guard at 11.55am every day – to be honest don’t bother standing with the hot and bothered crowds to get a glimpse of the Palace Guards walking in the sun unless you’re a pomp aficionado…

The visit of the Palace is reasonably interesting, especially if you want to see the main courtyard and the throne room where the Royal wedding took place. It costs 8 € to get in, including an audioguide, but is only open from April to the end of October.

Other than that, the main draws are the views from either side of the square.

On the side just at the top of the ramp, picture postcard view of Monte Carlo and the casino, the Port Hercule harbour, the not-so-pretty mountainside skyscrapers with Cap Martin and the Italian Riviera in the distance – so three countries in the same photo! 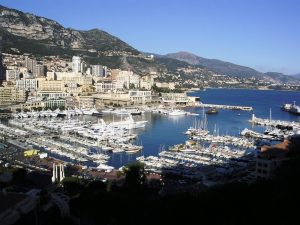 View over Monte Carlo, France and Italy from Palace Square

The opposite side of Palace Square also affords great views of the peaceful new harbour and residential neighbourhood of Fontvieille, entirely built on reclaimed land from the 1960s onwards.

View from Palace Square looking west towards the Port of Fontvieille

– The centre of the Old Town is dominated by three narrow pedestrian streets, notably rue Basse, rue Comte Félix Gastaldi and rue Emile de Loth: generally to be avoided, if possible, due to a concentration of tour groups, souvenir shops and snack bars serving rubber sandwiches at silly prices. Rue Emile de Loth is however slightly more pleasant and a little less crowded than the other two, due to the presence of some nice squares around the back of the Cathedral. The streets are however lovely in the evening once everyone has left and the Old Town has regained its medieval peace and quiet.

However, there are some unspoilt streets including rue des Remparts/rue Notre Dame de Lorète – running from the Port Hercule side of the Palace – and, on the opposite side built on the cliff facing Fontvieille, the Promenade Sainte Barbe featuring some dream flats! In the middle of the Old Town, check out the Place de la Mairie with the very quaint Chapelle de la Miséricorde and the town hall, and then head down towards the Place de la Visitation, home to most of the major government ministries and the residence of the Minister of State (the head of government, and therefore the closest you get in Monaco to a Prime Minister).

– A must-see is the Jardins Saint Martin, perched on the Fontvieille side of the cliff between the Cathedral and the Oceanographic Museum: head downwards towards the sea, to the little esplanade with the statue of Prince Albert I (the seafaring prince who founded the museum) and check out the amazing architecture of the building, that seems as if it was pre-built, lifted up intact by a giant and slammed into the cliffside. Entrance to the museum will set you back around 14 €. 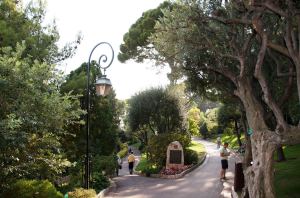 The lovely and peaceful Jardins St Martin, located in the Old Town just between the Oceanographic Museum and the Cathedral

– To leave the Old Town, head towards the opposite tip from the Palace, and walk down through the gardens after the Oceanographic Museum towards the Fort Antoine, which was built to defend the Principality against foreign invaders but now serves as an amphitheatre in the summer. It used to be totally exposed to the waves, before the extension of the Port Hercule began in 1999. 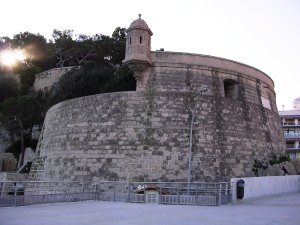 The Fort Antoine amphitheatre, located at the tip of the Rock

Walk down the steps around the new harbour jetty towards the soon-to-be-moved Yacht Club and you will be on Quai Antoine 1er, back at sea level. From there, you can either walk back along the U-shape of the port and admire some of the boats, or else use the Bateau Bus to cross the harbour towards Monte-Carlo and then take the public lift up to the Casino.

4 thoughts on “Walking Tour around the Old Town of Monaco”