At the start of every year, from December to March, the sunny hills on the western side of the Alpes Maritimes spring alive in a golden explosion, thanks to the blooming of the mimosa trees, with their bright yellow flowers. The tiny village of Tanneron in the Var department is the hub of this “mimosa trail”. Having had a brief walk around there in 2004, I decided to go on a proper hike in the area and see this golden vision for myself…

A brief introduction to the mimosa tree

Here’s some quick background information for city-dwellers like myself who haven’t got the foggiest idea about botany, trees, flowers, wildlife or nature in general. The mimosa itself is a large green tree of the acacia family and has around 800 species: they are used mainly for decoration or hedges but the flowers can also be used for perfume.

The mimosa tree, as viewed close to Tanneron

Though it is now cultivated mainly in South Africa, Australia and France, the mimosa is not at all indigenous at all to the French Riviera: it was brought in the late 19th century from Australia, notably by the British nobles who came to live in the area and wanted to add some colour to their gardens (we all know how the Brits love their gardens!) and then strongly promoted by the local horticultural societies, as well as being used in the perfume industry, centred around Grasse. It’s a shame that the Brits didn’t decide to bring over wallabies and koala bears at the same time, otherwise the Riviera would be quite different right now!

A mimosa flower in full bloom

Nowadays, the mimosa trees extend over a 130km arc from the western Var coastline in Bormes les Mimosa, via Sainte-Maxime, Saint Raphaël to Tanneron then across the border into the Alpes-Maritimes through the village of Pégomas to Grasse, something which the local tourist boards have marketed as the “Route du Mimosa” (the Mimosa Trail – the website is only in French but I managed after a long search to find an English document that can be downloaded via this link).

This is easy to understand, because since their introduction, the mimosas have become a symbol of the French Riviera and synonymous with the winter sunshine in the area, even though some French protectionists like to campaign about the fact that they were unfairly introduced, have invaded the local eco-system and are very flammable. I’m tempted to say who cares whether they are Australian or not, they still look nice!

Exploring the mimosa trail, a hike around the “Crêtes de Tanneron”.

Now concretely, there are two ways to properly explore the mimosa trail and enjoy the winter sunshine: if you have more time and are already based in the area, just take a full day to drive along the small country roads between Bormes les Mimosa and Grasse and soak up the bucolic atmosphere of eastern Provence.

The other option is to hike around the area with the highest concentration of mimosas, centred around the tiny but picturesque village of Tanneron. 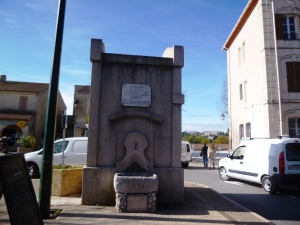 This solution is ideal if you have a car but are based closer to Nice, as it’s just under an hour’s drive away. This is the option I took on a beautiful, sunny but not so warm day, following a hiking trail known as the “Crêtes de Tanneron” (the slopes of Tanneron) as well as the “Route de l’Or” (Golden Route) which, according to the marketing, provided the best viewpoints of the mimosas, the French Riviera and the Esterel mountains.

The hike itself can be downloaded via this link, which is only in French (of course, why would any foreigners dare to follow a hike?), but is pretty self-explanatory: the guide indicates 15km and 5 hours but beware, we went at a reasonable pace without long stops and it ended up lasting around 6 hours and 20km according to the GPS, so it was pretty exhausting. Still, I’m glad I did it – here are some of the highlights of the walk, bearing in mind that it’s a loop so you can’t really cut across if you’re tired half way through (but see my cheater’s guide at the end if you can’t be bothered)!

The view when starting the hike from Tanneron

The view towards the north-east from the picnic stop 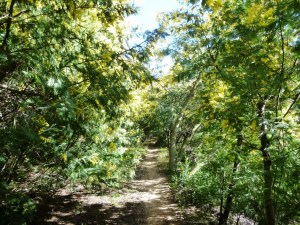 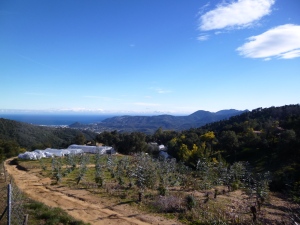 This hike can be done any time of the year but obviously preferably between December and March to see the mimosas in full bloom. Now as I mentioned, you need to plan a whole day for the 6-hour walk and don’t forget that the days are much shorter in winter so start early and don’t let yourself get caught out by the sunset as this walk is long – make sure you have plenty of water but also dress in layers as it can get quite chilly as soon as you are in the shade, despite this not being a high altitude walk.

The full walk is great exercise and, having walked 20km, it was a great exploit for my friends and myself to brag about on Facebook! However, if you don’t have the time or inclination to walk such a long-distance loop where it’s hard to turn back, here are some tips to optimise the mimosa experience in Tanneron: 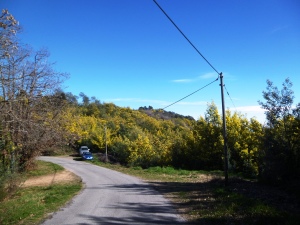 Mimosas in full bloom and directly accessible by car via Les Farinas!

Now that was a bit easier, wasn’t it?

All in all, the mimosa trail around Tanneron makes for a great excursion in the countryside if you are lucky enough to enjoy a sunny day during the winter and fancy testing the great outdoors, so give it a try!

One thought on “On the golden trail of the mimosa trees in Tanneron: an early spring hike in the Var”