Those of you visiting Monaco this week will have noticed, in addition to the usual beautiful Christmas decorations on Casino Square and the ubiquitous Christmas market on the harbour, a certain air of joy in the air and spontaneous celebrations throughout the Principality.

This is all because of a historic event that has taken place for the first time since 1958, with the birth on Wednesday 10 December of the first children of TSH Prince Albert II and Princess Charlene:

Naturally there have been a great deal of festivities to mark this occasion, all announced in a very official manner in a press release by Prince’s Palace a few weeks beforehand, notably: 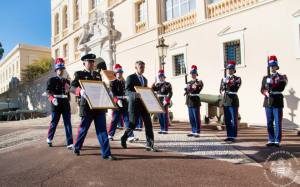 The head of the Public Forces, Colonel Fringant and the Prince’s Chamberlain, Lt-Colonel Soler, nailing the proclamation to the Palace doors (C) Palais Princier de Monaco

Those of you arriving in Monaco for the first time will see all these special decorations, posters in the street, as well as the ubiquitous portraits of the Prince and Princess all over the Principality and wonder why all the fuss. The main reason is that there is a very close link, forged over hundreds of years of history, between the Princes of Monaco, the royal House of Grimaldi and the people – not just the 8.000 or so Monegasque nationals, but also the 28.000 or so members of the various international communities living today in the Principality. In this respect, Monaco is both a sovereign nation with its own culture and identity, but also a village.

The Prince of Monaco is in absolute terms with regards to the size of the country one of the world’s most powerful monarchs, despite Monaco being a constitutional monarchy and is in charge of pretty much the whole governance via several delegations.

There were huge public outpourings of grief upon the death of Prince Rainier III in April 2005 and conversely moments of joy upon the accession of Prince Albert II three months later and his wedding in July 2011, just like this week with the birth of the Royal twins, hence the emotions of the population running quite high here.

10 interesting facts about the history of Monaco and its Princes

To finish off, here are ten interesting facts that you may not have known about the history of Monaco and its Princes (and that I learned whilst attending a local school in Monaco between 1989 and 1992), so that you can prepare for your visit to Monaco or at least impress your friends during dinner party or cocktail conversations:

The statue of Francois Grimaldi aka Malizia on the Palace Square

The rock of Carlat in Auvergne, part of the county of Carladès which now has a new Countess! 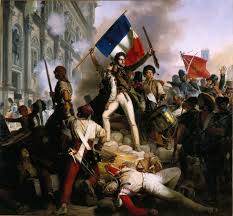 The French Revolution also affected Monaco quite a bit as the bloodthirsty mobs didn’t really like crowned heads…!

Menton – once part of Monaco!

Prince Charles III, the architect of Monaco’s rebirth during the Belle Epoque 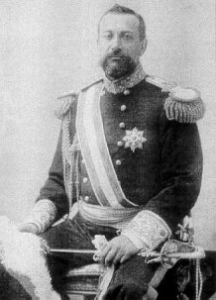 Prince Albert I of Monaco, who also opened the Oceanographic Museum 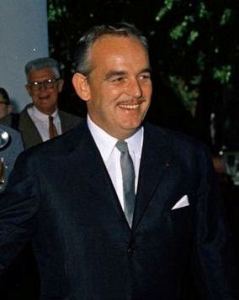 Hope this has given you a bit of extra general knowledge about the Principality and to conclude, the French Riviera Blog offers its warmest congratulations to the Prince and Princess and wishes all the best to Prince Jacques and Princess Gabriella!